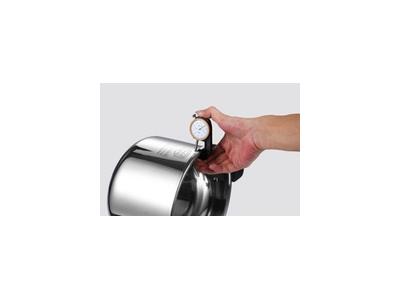 
--Zhuhai Double Happiness Electric Appliance Co., Ltd. from 1956. Production in 1964 developed the first port of the pressure cooker. After half a century of development, has now become a group of companies. Based industry to the production of metal cooking utensils, electric cooker, its coverage of over 150 varieties of pressure cooker, electric pressure cooker, rice cooker, wok, over 450 specifications of a single product. Together constitute a set of raw material supply, production, sales, after-sale service of the cookware industry, is one of the country's largest cookware production base. Double Happiness Electric Appliance Industrial Park in Zhuhai, an area of 92,600 square meters. Has three pressure cookers, pressure cookers, rice cookers, stainless steel products, aluminum sheet metal processing five production lines, including electric pressure cooker production line, annual production capacity of 3 million, the pressure cooker production line 4, with an annual capacity of 4.5 million, rice cooker production line 3 production capacity of 3 million. Expected in 2012, the annual output of electric pressure cookers, rice cookers annual output will reach five million. Within the next three years, double happiness will achieve a breakthrough in the development and steady improvement in market share. Double Happiness electronics market network layout density, the infiltration, the establishment of the eight major marketing centers and forty-six offices in the country, has 158 dealers in the country, 460 two distributors, and 4000 retail outlets, including 2000 image of the store, 600 Management Purchasing Guide by Double Happiness directly controlled terminal. And into the international and domestic Wal-Mart as the representative of a large chain of super system, the establishment of large and medium-sized shopping centers in the country mainly an urban part of the shop the shop and the image counter, with a number of highly qualified Purchasing Guide team, formed covering the whole country. distribution network. Product marketing more than 30 provinces and cities and exported to Europe, America, Japan, the Middle East, Southeast Asia, more than 40 countries and regions. As the first port of the pressure cooker manufacturers in the process of upgrading of products, in terms of standards, processes, materials, technology, and a complete range of technical, with a pressure cooker, the development of the various stages of expertise. Emphasis on the leading product development, and constantly studying innovation, product excellence, and constantly improve the product design, function, shape, technology continue to make breakthroughs, the technological level of the leading products has been a leader in the industry. Double Happiness is growing brands in the world created for the one-China.

Send Inquiry to This Supplier